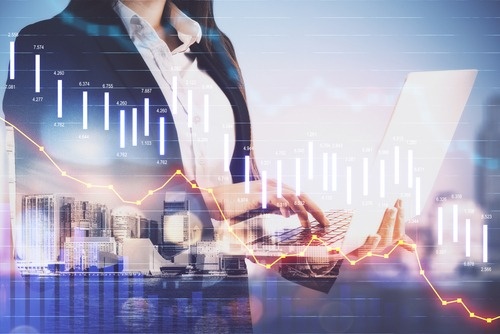 Stocks posted big numbers in July, erasing some of their first-half losses. Investor sentiment was lifted by receding inflation and recession worries and a better-than-expected start to the second quarter earnings season.

Stocks have been under pressure all year from rising inflation and slowing economic growth. There weren’t many signs in July that suggested either inflation had cooled or that the economy was rebounding. Nevertheless, investors saw falling energy prices and persistent strength in the labor market as hopeful signs that any economic downturn may not be as severe as some expect.

Investor sentiment improved further as earnings season got underway in the back half of the month. This gathering optimism was not a result of exceptional earnings results. Rising enthusiasm was perhaps more attributable to the fact that earnings were not nearly as weak as many had feared. Companies painted a picture of a reasonably healthy consumer and businesses effectively navigating their inflation and supply chain challenges.

The month of July culminated in perhaps the most critical week of the summer for the market, with investors awaiting information on corporate earnings, a Fed meeting decision on interest rates, and the release of an initial estimate of the second quarter GDP.

Earnings came out of the gate a bit shaky as a big box retailer missed earnings and guided future earnings estimates lower. However, subsequent earnings reports from big technology companies impressed investors. Markets were further relieved by the Fed’s decision to hike rates by 75 basis points and Fed Chair Powell’s comment that the pace of future rate hikes may slow.

What Investors May Be Talking About in August

Historically, August has been positive for stocks, with an average return of 0.7 percent for the month. August also has more positive monthly performances (55) than negative (39).3

During the month, the government will release a string of economic reports to give the Fed fresh insight into the economy for its late September meeting. After September, the Fed only has two scheduled meetings for the rest of 2022—one in early November and one in mid-December.

T I P   O F   T H E   M O N T H
As you retire, look at the changes in your expenses. Will your mortgage soon be paid off? What business-related expenses will disappear, and what new expenses will emerge? This may matter greatly in your retirement strategy.

Gross Domestic Product: The economy shrank at an annualized rate of 0.9 percent in the second quarter as consumer spending moderated and businesses reduced inventories. GDP posted its second straight quarter of negative growth, meeting the technical definition of a recession. Unlike most recessions, however, the past two quarters have been marked by strong employer hiring.7

Industrial Production: Industrial production declined 0.2 percent in June, though it was higher by 6.1 percent in the second quarter.10

Housing: Housing starts slipped 2.0 percent as rising prices and mortgage rates weighed on buyer demand. It was the second consecutive month of declines.11

New home sales declined 8.1 percent in June, falling to levels not seen since April 2020. Year-over-year sales were down 17.4 percent.13

“The most valuable player is the one who makes the most players valuable.”

Fed officials agreed to a 0.75 percentage point hike in the federal funds rate, acknowledging that the economy has slowed since the Federal Open Market Committee in June.16

In a post-meeting press conference Fed Chair Powell said that future rate hikes would be made on a meeting-by-meeting basis and that it may become appropriate to slow the pace of future interest rate hikes.16

Michael introduces Levi to his friends, stating that Levi’s father is also the son of Michael’s father. But Michael is an only child. So how are Michael and Levi related?

LAST MONTH’S RIDDLE: Tim says he heard that you can find $200 stuffed between pages 147 and 148 of a romance novel at the library. What detail convinces you that he is wrong?

ANSWER: The pagination. Page 147 is a right-hand page, page 148 would be the left-hand page printed on its reverse. So nothing could be kept between these pages.