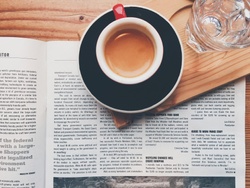 Monthly Economic Update for May 2022

April was a challenging month for investors as losses in mega-cap technology companies and high-valuation stocks spilled over to the broader market.

Stocks struggled all month as investors grew increasingly skittish over a stream of hawkish comments by Federal Reserve officials.

Fed Chair Jerome Powell unnerved investors when he suggested that it may be appropriate to consider front-end loading rate hikes. A few weeks earlier, Fed governor Lael Brainard, considered one of the Fed’s more dovish members, implied that the Fed could take a more aggressive monetary tightening approach.

Inflation continued to be an overhang on the market. March’s Consumer Price Index (CPI) was 8.5 percent year-over-year, the fastest pace since December 1981, while the Producer Price Index reflected continuing price pressures in the pipeline, picked up 11.2 percent from a year ago—a new all-time high.2

The combination of a tightening monetary policy and hot inflation drove bond yields higher, with the 10-year Treasury Note yield moving from 2.32 percent at March-end to 2.89 percent by the close of April.3

The first-quarter earnings season got off to a mostly positive start. Of the 55 percent of the S&P 500 companies reporting earnings so far, 80 percent have beaten Wall Street analysts’ earnings estimates. Companies appear to be navigating accelerating inflation, shaky consumer confidence, higher rates, and supply chain challenges.4

Markets closed out April with a volatile week, reflecting the general investor unease that weighed on markets all month.

What Investors May Be Talking About in May

In May, investors will be adjusting to the most recent Fed decision about short-term rates and looking for clues about what to expect at the next few Federal Open Market Committee (FOMC) meetings. The two upcoming meetings will be held in fairly quick succession: June 14–15 and July 26–27.6

While the markets may have already priced in some of the Fed's plans for higher rates, it’s unclear how investors will react when governors provide guidance for the rest of the year.

T I P   O F   T H E   M O N T H
Starting a small business? A written plan is handy for forecasting, budgeting, and presenting your idea to potential investors. A written plan is far preferable to one you keep in your head.

Global markets trended lower as China’s lockdowns and the war in Ukraine continued to weigh on investor sentiment.

Gross Domestic Product: The economy shrank at an annualized rate of 1.4 percent in the first quarter. The decline in GDP growth was largely attributable to a widening trade deficit and a slowing rate of inventory build-up by businesses.9

Employment: The unemployment rate dipped to 3.6 percent as employers added 431,000 jobs in March, while January and February estimates were revised higher. This marks the eleventh consecutive month that payrolls have increased by more than 400,000. Wage growth (+5.1 percent in February), while strong, remains below the rate of inflation.10

Retail Sales: Retail sales rose 0.5 percent in March. Much of that gain was attributable to an 8.9 percent jump in sales at gas stations, a reflection of rising gasoline prices.11

Housing: Housing starts rose 0.3 percent. Economists had expected a decline for the month. The increase was driven by a jump in multifamily homes, as starts of single family homes tumbled.13

Sales of existing homes fell 2.7 percent in March amid higher mortgage rates and home prices. The median price of an existing home sold last month was $375,300, which represents a 15 percent increase from March 2021 and the highest price ever recorded.14

“Surround yourself only with people who are going to take you higher.”

On April 6th, the minutes from March’s FOMC meeting were released. These pointed to a growing consensus for one or more future rate hikes of 50 basis points and a general agreement on a framework for reducing the Fed’s balance sheet by $95 billion per month.

The balance sheet reduction is likely to begin in May and be phased in over three months.18

During the FOMC meeting, the participants concluded, “Ukraine was perceived as adding to the uncertainty around the outlook for economic activity and inflation, as the conflict carried the risk of further exacerbating supply chain disruptions and of putting additional upward pressure on inflation by boosting the prices for energy, food, and other key commodities.”19

You use it between your head and your toes; the more it works, the thinner it grows. What is it?